Our experience at Smashing Conference NY and Awwwards NYC

Two weeks ago I had the opportunity to attend two interesting events in NY: Smashing Conference NY and Awwwards NYC; So far this year we also attended Drupalcon New Orleans and wanted to participate in events that come out of our traditional line of development-oriented events. I had many expectations for these two events because for me personally, are places where I learned a lot and served as reference when either seeking information or inspiration.

The first session that struck me was Atoms, modules and other fancy particles given by Alla Khomoltova. Most of us designers, want our sites to maintain visual consistency during the growth of the site and passing of time. This does not always happen and therefore we see certain sites or applications that began having a defined line, losing or changing it over time with variations of elements, such as buttons, colors, fonts, etc. The same happens as a developer; we always try to build our applications looking for ways to reuse code and seeking to optimize it. Considering this line, Alla emphasized on the migrattion from site designing to designing systems. The first thing that crossed my mind was how to standardize elements that we already had designed. With the limits of time and goals that must be met, we sometimes simplify designs that ultimately are not as adaptable or scalable as we initially thought. Alla presented the process by which FutureLearn built a truly coherent and scalable system.

There were other interesting sessions the first day such as Adapting to Input, by Jason Grigsby, which showcased how to better manage our way of thinking the inputs in our applications, and the Future of preprocessors by Roy Tomeij, who gave very interesting examples of applications outside the preprocessors "normally used".

On Wednesday the sessions that caught my attention were Driving Culture with Design by Frances Berriman and The Physical Interface by Josh Clark. Frances was in the team that carried out the modernization project of the digital services UK, worthy of awards at international level, aiming to create a design-oriented culture and how we could implement it in our own teams. Josh gave very good examples of things we can do nowadays with our devices and how we really have no limits when it comes to further integrating our reality, or our "physical interface" with the virtual interface in which we are usually thinking and working.

Thursday was the first day of Awwwards NYC and was quite interesting. I attended the chat with Anton & Irene, "From Agency Drones To Design Studio Powerhouse" which described how was his process and experience from being designer agencies to set up their own design studio. They showed some processes working with Wacom and what they have achieved so far.

Jon Burgerman with "Encourage the Ferret", gave examples from his own experience which invited us to be more creative and random so we all should create, invent, design without those restrictions that sometimes we bound ourselves to. 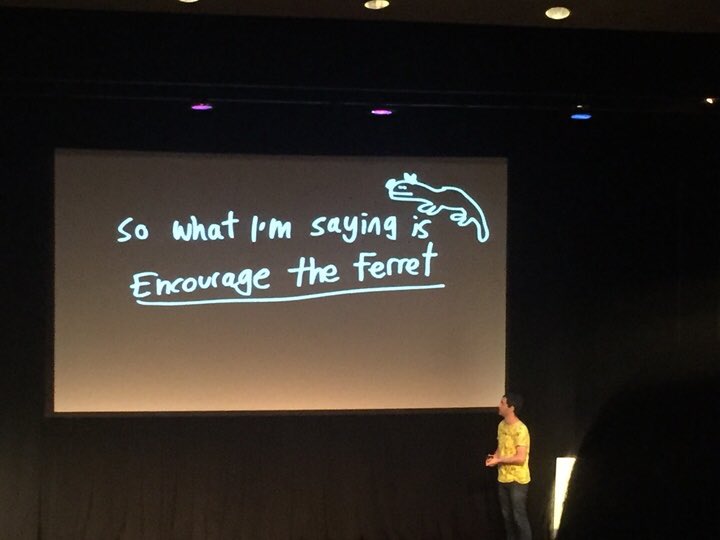 Friday was the second day of the conference and had interesting chats, such as Shaun Tollerton's and JM Villanueva's, in which they showed us how was the process of designing for Android Wear; his work was so striking that Google used them as an example in their lectures when announcing new products. Matias Korea explained us about his experience and lessons learned when building Behance. Definitely it taught lessons we can all take into account in our daily lives.

The funny note on the second day was by Natasha Awasthi with her talk about "The three engineers in product management you meet heaven". Although the talk was funny and had its degree of humor, it showed a detailed analysis of personalities and it actually described the developers I know.

Humbled to speak at #AwwwardsNYC conference. My slides on #Engineers we meet in #productmanagement heaven!https://t.co/EFVC3qOcZV

These two events were quite interesting and I look forward to keep participating in them!